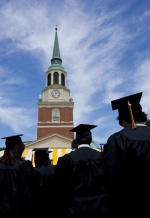 Research has shown that alumni are more likely to give money to their alma mater if they can expect something in return. Specifically, they tend to step up their donations if they think it will improve their own child’s chances of being admitted to the university. In a study published in the February 2009 issue of the American Economic Journal, Jonathan Meer and Harvey S. Rosen show that graduates of the selective university they studied followed what they called a “child-cycle pattern” of giving. Donations went up as their child neared high school graduation and went down if their son or daughter was not accepted to the university, according to the article entitled “Altruism and the Child Cycle of Alumni Donations.” Now a new study by the same authors suggests that donations patterns are also influenced by family bonds. In a working paper entitled “Family Bonding with Universities,” the researchers report that giving to the selective university that they studied also depends on the extent of families ties to the school. Does the alumnus have a spouse, parent or other relative who also attended the university? Then they are more likely to donate and donate big.  Read more about Meer and Rosen’s latest findings.

Thanks a lot for spending some time to line all of this out for people like us. This kind of blog post has been really helpful if you ask me.