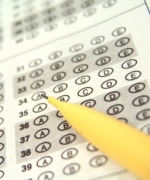 The class of 2009 was the most diverse group ever to take the SAT, according to the College Board, which administers the standardized test. The percentage of minority students taking the SAT increased to 40 percent this year, up from 29.2 percent in 1999. Hispanic test-takers represented the group showing the fastest growth, but there was also a significant increase in the number of students who reported that English was not their only first language. “We are tremendously encouraged by the increasing diversity of participation in the SAT,” Gaston Caperton, president of the College Board, said in a statement. “The College Board will continue working together with educators nationwide to ensure all students have the opportunity to confidently pursue their college dreams.” Click here to see state-by-state reports and college attendance patterns.

SAT is meant to be an aptitude test, it is not meant to have a cultural, racial, or gender bias, but it does. My contention is that if you can raise your score more than 300 points by test prep classes & practice exams, then it is NOT an aptitude test. Hence the only real indicator of score will be the size of the bank account behind the test taker. My children scored well on this test without either of those aforementioned items, but that is because they have parents who value education and expected them to not only have decent grades, but actually learn something in high school! They were put in the most rigorous curriculum their school offered and it showed when it came time to test. Yes, it was lots more work than most kids. Yes, it was more time spent studying. Their grades suffered as a result of not taking those classes they could sleep through and get A’s. The strategy paid off in the end. Both are at the schools of their choice, and having an easier time than some of their high school classmates, because they were prepared for the rigors of a college education.
I think it is wonderful there are kids of all types taking the test, but it must provide information on their aptitude in order to continue to be valid for college admissions.
I would suggest schools should profile the “most successful” students they have graduated and develop a method to identify those kids, before they admit anyone. Sternberg at Tufts seems to have gone a long way toward that goal. I hope more schools will look at innovative ways of choosing students and not just high stakes tests.