State of College Admission Report: Enrollment and Economic Uncertainty Both on the Rise 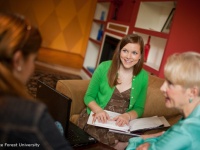 College applications continue to rise and enrollment has reached an all-time high, but the recent economic uncertainty is forcing a change in plans for many students. These are just a few of the findings in the 2009 State of College Admission report released this week by the National Association for Admission Counseling. The report, based on surveys of colleges and universities and counselors nationwide, examined both recent trends and long-term changes in college admissions. Here are some of the other key figures in this year’s report:

See a list of other key findings in the report.