What Happens When there are More Women than Men on Campus? 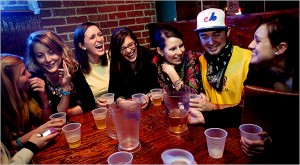 Women have accounted for the majority of U.S. college enrollments since 2000. That’s according to a new report by the American Council on Education, which found 57 percent of those who enroll in college are female. Men also lag in graduation rates at the undergraduate level. Why the gender imbalance? Researchers say men tend to drop out more than women and generally have lower grades. What’s more, older students as well as low-income, black and Hispanic students tend to be disproportionately female.

The gender gap is not universal. According to the New York Times, Ivy League schools are largely equal in gender, and a few are still predominately male. But at some universities, efforts to balance the numbers have led to complaints that less-qualified men are being admitted over women. In December, the United States Commission on Civil Rights  subpoenaed admissions records from 19 private and public colleges as part of an investigation into possible discrimination against qualified female applicants.

But the legal and academic ramifications are not the only issues concerning women. Female students say they also worry about the social ramifications of the gender imbalance — namely the trouble they now have finding dates. “On college campuses where there are far more women than men, men have all the power to control the intensity of sexual and romantic relationships,” Kathleen A. Bogle, author of “Hooking Up: Sex, Dating, and Relationships on Campus,” told the New York Times.  W. Keith Campbell, a psychology professor at the University of Georgia concurs, adding that women on predominately female campuses are being victimized by men because they have outperformed them. Says Campbell: “When men have the social power, they create a man’s ideal of relationships.”