A Kaleidoscope Approach to Admissions 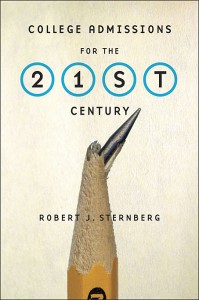 Back in the day when standardized college admissions tests were created, most applicants were white males in the middle- to upper-middle-class. Today, applicants are from all racial and ethnic backgrounds. That’s one of the reasons why Robert J. Sternberg, the new provost of Oklahoma State University, is urging college admissions deans to go beyond standardized test scores and high school GPA and consider a wide range of qualities when ranking applicants.

The admissions strategy Sternberg is espousing is called the “Kaledioscope” system, and it has been used successfully at Tufts University where he served as dean of arts and science for the last five years. We first wrote about the system on this blog last year.  Now Sternberg has outlined the details of the experiment in a new book called College Admissions for the 21st Century (Harvard University Press)

In an interview with Inside Higher Education , Sternberg said the Kaleidoscope system is based on the view that a college education should produce leaders who will make a positive difference in the world. That’s why questions are based on a theory of leadership called WICS, which stands for wisdom, intelligence, creativity, synthesized.

In a nutshell, the system entails assessing applicants’ creative, analytical, practical and wisdom-based skills. For example, applicants might be asked creative questions like “write a story with a title such as ‘The End of MTV’ or submit a creative video via YouTube. Or in assessing analytical thinking, the question might be: ‘What is your favorite book and why?’ An example of a practical item would be to explain how you would convince a friend to change their viewpoint on an issue. A wisdom-based question could be to explain how you would take a current passion and transform it later to serve the common good.

While the responses are rated holistically, they also are based on rubrics. In addition, the system’s ability to predict college success has been validated statistically, Sternberg said. Furthermore, while traditional standardized tests show “substantial ethnic-group differences, Kaldeidoscope measures do not,” Sternberg said, adding that the measures are designed to supplement traditional assessments, not replace them.

Measurements like the ones in the Kaleidoscope system reflect 21st century thinking, in contrast to standardized tests, which have remained largely unchanged for the last 100 years, Sternberg said.

“Those who work for testing organizations might see this constancy of measurement as a positive thing. But imagine if other technologies, such as in telecommunications or medicine, were largely stuck a century in the past!” he said. “The problem, as I see it, is that the skills measured by traditional tests are quite narrow and do not adequately reflect the full range of skills needed for college and life success.”