“Conscientious Objector” Opts Out of SAT 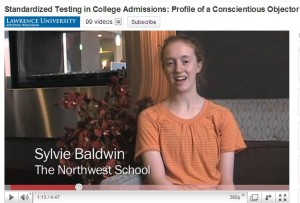 When admissions officers at Lawrence University met high school senior Sylvie Baldwin, they realized that she was a perfect example of why the school decided to enact a test-optional policy back in 2005. So they came up with the idea of producing a video with Sylvie and posting it on YouTube. In the 5-minute clip, Sylvie explains why she has decided not to take standardized tests ever again and plans to apply to both test-optional colleges and those that still require SAT or ACT scores.

Entitled “Standardized Testing in College Admissions: Profile of a Conscientious Objector,” the video begins Steve Syverson, Lawrence’s dean of admissions. Syverson explains that the school’s decision to go test-optional was driven in part by the fact that test-prep has become a $1 billion per year industry.  After Lawrence went test-optional, he added, even some students with very high test scores opted not to submit them as part of the admissions process because “they resonate so strongly with the attitude that these tests don’t represent who I am as a person.”

Enter Sylvie, a student at the Northwest School in Seattle. She made her decision to opt out of standardized tests after receiving notice that she would soon be “represented” by her test scores. “I don’t want that. I’m more than a number.” While she realizes that some universities might not consider her application without the scores, she is hoping to have conversations with admissions officers.  “I hope I’ve at least put the idea in their brain that there could be a ton of students out there who would say, ‘I don’t want to take this test. I don’t think this test is fair. I don’t think this test represents me or who I am.’”

Baldwin has calculated that she would have spent 50 to 60 hours preparing for the exams. She will invest that time instead in writing proposed legislation for the state of Washington that would require drivers ed courses to add a unit on the environmental impact of driving. She adds that her conscientious objector status has nothing to do with fear of not doing well on the SAT. “I don’t believe in (standardized tests). I don’t support this. And I’m one of those people that say if I don’t believe in this, I’m not going to do it.”