Student Urges Others to ACT Out Against SAT 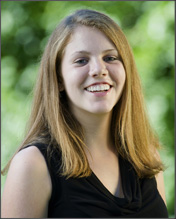 A few months ago, we introduced you to Sylvie Baldwin, a high school senior who worked with Lawrence University to produce a video explaining why she would only be applying to test-optional colleges.

Now meet Allie Kauffmann, the daughter of a film professor at Boston University, who also has gone public with her views about the SAT. Her video was inspired by the fact that an $800 test-prep course improved her score by 300 points. “What if you don’t have the money? Too bad,” Allie explains in the film. “You’re competing against kids who do. It’s like playing basketball against kids on ladders.”

Allie and her father have taken their cause one step further. They have started a website and a petition called  — “ACT Out Against SAT”  — urging college and universities to stop requiring the  tests as a condition for admission. Their goal is to gather 10,000 signatures and submit the final document to the American Association of Collegiate Registrars.

“We have put this petition together to call your attention to how unfair and biased these tests are. The tests are unfair to females, minorities, students whose second language is English and students who can’t afford quality test prep classes or tutors,” they write. “Too many students are at a disadvantage when taking these tests.

“Therefore, we respectfully ask that you no longer use ACT or SAT scores when evaluating whether a student qualifies for admission to college or when determining scholarships.”

At last count, the petition had a little over 200 signatures, but Allie has at least one strong ally on her side. According to the Chronicle of Higher Education, FairTest a testing watchdog group, worked closely with the Kauffmanns on the film.

I admire Wake Forest for creating dialogue related to issues that effect the undergraduate education students receive. Based on this initiative I think your readership would be interested in the compelling blog I have launched in August, 2010 “Propelling Undergraduate Business Schools Forward”. I have quality posts 2-4 times a month around 1,200 words, many having cartoons to accompany the topic.

I encourage your readership to visit this blog and dialogue with me about important topics including professor evaluation, achieving higher attendance, focusing teaching on application not content, effective use of electronic textbooks, and many more