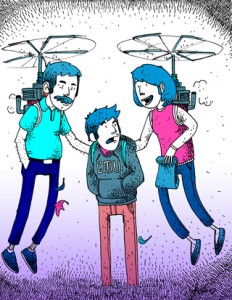 Next month, thousands of college freshmen will be heading off for school and venturing out on their own for the very first time. But if the college admissions process is any indication, it may be all they can do to make sure their parents stay behind.

According to anecdotal reports, super-involved helicopter parents are so enmeshed in the college admissions process that they may be doing their children more harm than good. In one of the most egregious examples, one mother admitted 15 years later that she had thrown away her son’s acceptance letter to Harvard without telling him. Her excuse? “Oh, I just love you so much that I didn’t want you to be that far away.”

With that in mind, here’s a list of don’ts for super-involved parents courtesy of nationally syndicated columnist and independent college advisor Lee Bierer.

Don’t write their essays. You might feel tempted to edit their essays because you think you know best about what admissions officers would want to read. Guess what, you’re probably wrong.

Don’t talk too much on the campus visit. Let your child have their say, and keep your own questions to a minimum. Whatever you do, don’t introduce your child to school officials. Let them introduce you!

Don’t ever refer to this as being “our” college admissions process.  Comments like “we’re applying” or “we interviewed,” are all taboo. This is your child’s life, not yours. Not to mention, their essay, their application, and their interview.