Going Against the SAT

From the New York Times:

A New Book Argues Against the SAT 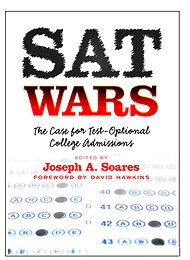 When Wake Forest University announced three years ago that it would make the SAT optional for its undergraduate applicants, among those cheering was Joseph Soares, a sociology professor at the university. Mr. Soares has channeled his enthusiasm for Wake Forest’s decision — as well as for similar policies at several hundred other colleges — into a new book, “SAT Wars,” that argues for looking beyond standardized test scores in college admissions. (The book was published last month by Teachers College Press.)

“The SAT and ACT are fundamentally discriminatory,” Mr. Soares said in a phone interview last week.

Through his own essays in the book, as well as those of contributors that he edited, Mr. Soares seeks to build a case against the SAT. He characterizes it as a test that tends to favor white, male, upper income students with the means to prepare for it.

Chang Young Chung, a statistical programmer, and Thomas J. Espenshade, a sociology professor, both at Princeton University, co-authored one chapter in which they cite a study that examined national SAT data from the late 1990s. That study broke applicants into three socio-economic classes. They found that 29 percent of students from the highest social class scored above 1400 on the SAT, compared to 24 percent of middle class students and 14 percent of lower class students. Turning that pyramid on its head, the study found that those students from lower social classes were more likely to have earned a top high school G.P.A.

In seeking academically engaged students, Mr. Soares said in an interview with The Choice, colleges should pay more attention to high school grades and give less credence to standardized test scores.

“High school grades are the single most powerful predictor of college performance,” he said. “High SAT scores over-predict how well a student is going to do in college, and they’re inversely related to academic engagement.”

In another chapter of “SAT Wars,” Jay Rosner, executive director of The Princeton Review Foundation, addresses the gender gap on the SAT. Mr. Rosner asserts that the math portion of the test is “male-leaning,” citing data from 1998 and 2000 which found that men performed better than women on 97 percent of math test questions whereas women performed better than men on only .8 percent of them.

Mr. Soares agreed. “I don’t blame the SAT,” he said. “But they’ve inadvertently ended up with a statistical algorithm that is systematically biased against racial minorities and women.”

Mr. Soares emphasized that those colleges that have taken the plunge, and gone test-optional, have found themselves choosing from an applicant pool that is richer in the diversity of students’ backgrounds and interests. He cited Wake Forest as an example, where in the three years since eliminating the SAT as a requirement, the school has seen dramatic increases in minority applicants, international students and Pell Grant recipients at rates far outstripping the overall rise in total applications (16 percent).

Martha Allman, dean of admissions at Wake Forest, echoed the satisfaction with those statistics. A contributor to “SAT Wars” herself, she had written that she was “still a little scared,” at having eliminated the SAT. But, in a phone conversation last week, she sounded more confident.

“The first cohort are now juniors, and we’ve seen our applicant pool change,” she said. “We have greater diversity and better students. The proof is in the pudding.”

At the least, the book appears to have gotten some attention within the corridors of the College Board, which oversees the SAT exam. Kathleen Steinberg, a spokeswoman for the board, said in an e-mail message that “a number of staffers” had read it.

“As a nonprofit education membership organization, the College Board respects the right of colleges and universities to set their own admissions policies,” Ms. Steinberg said. “However, given the complexity of the admissions landscape, we strongly encourage institutions to use as many valid factors as possible when evaluating their applicants, including standardized test scores.

She added: “Research shows that the SAT, when combined with high school GPA, is the best predictor of first-year college success. And performance on the SAT also can be used by admissions personnel to help predict retention and performance beyond freshman year.”